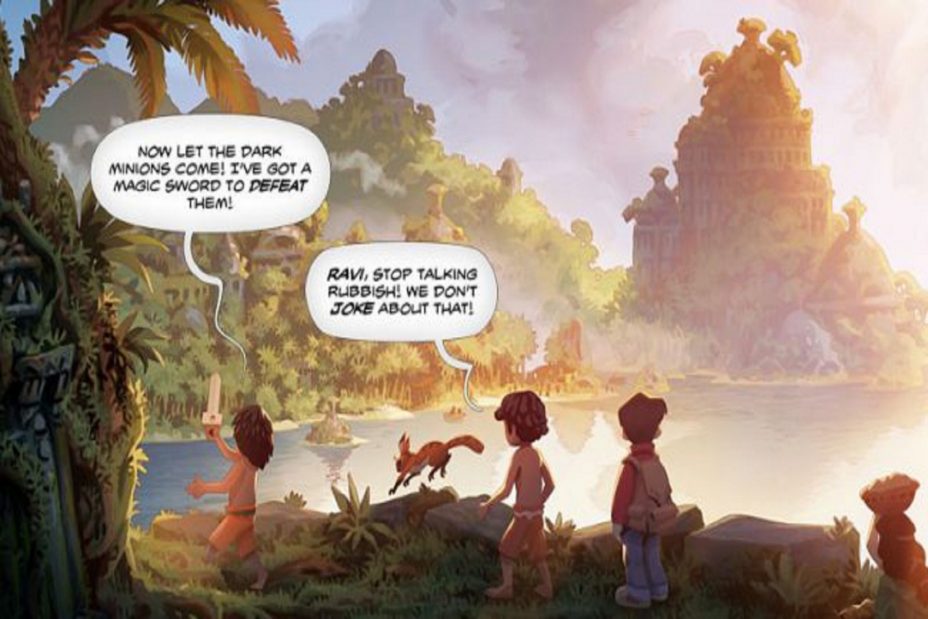 Web comics are an entertaining pastime, and the imagination and creativity at work is inspirational. Due to their accessibility on your mobile device, it’s easy to find new ones whilst on the move so they’re a great alternative to endlessly scrolling down your social media feed. To top it all off, web comics are also free so there’s no excuse not to peruse the awesome examples out there. We’ve picked some of the best web comics for you to explore in this article.

Many of the world’s most well-known fictional characters were born out of comics. Superheroes such as Superman, Batman and Spider-Man have piqued the interest of generations of readers and spawned big-budget movie spin offs too. They’re so successful that, despite the rise of the internet, the printed comic industry is still booming.

If you’d like to nail your drawing skills to help you on the way towards creating your own comics, why not check out our post on how to draw?

Click on the icon at the top-right of the image to enlarge it.

The Wormworld Saga, by Daniel Lieske, stars teenager Jonas Berg. He is the archetypal dreamer, frequently lambasted for being in his own world. One summer, he falls down a portal to another world, and the following chapters track his adventures. It’s a premise that’s reminiscent of Alice in Wonderland but the adventures inhabit a very different world. The illustrations are phenomenal and the plot twists and turns. There are currently nine chapters to explore.

Cartoon Connie is a web comic blog courtesy of cartoonist and writer, Connie Sun. Her illustrations depict the life and mind of a socially awkward, single, city-dwelling human and her wise elephant companion. With subjects spanning the US Democratic Party debates and people she’s seen on the subway, this is an intimate and honest cartoon that speaks to the heart.

Hyperallergic is an online art-focused magazine. With content ranging from podcasts to reviews, it also has its own comic section that has new work uploaded frequently by its contributing artists. These vary from light-hearted examples such as What’s in the Stars for Artists (the humorous horoscope comic above), to more hard-hitting news pieces like How to End a Protest, a six-part series regarding the protests at Whitney Museum.

Nedroid (pronounced ‘NEH-droid’) is a web comic by artist Anthony Clark. He has his fingers in a few different comic pies, but is best known for a goofy comic series featuring Beartato – a potato/bear hybrid, of course – that has been running since 2006.

James Squires, the artist behind web comic Moonbeard, is an illustrator based in New Zealand who describes himself as a ‘delusional comic person, coffee drinker, cat owner’. These surreal, standalone cartoons often feature surprising twists, and they’re well worth a browse. You can also browse his work via his Instagram feed.

Webcomic Name first appeared in July 2016 and swiftly became a firm favourite. It’s the work of UK-based artist Alex Norris and it never fails to amuse us with its excellently naive artwork, blobby characters and simple jokes, usually topped off with Webcomic Name’s staple ‘oh no’ punchline. It shouldn’t really work but it very much does, every single time.

Anne Szabla’s Bird Boy follows the story of Bali, a 10-year-old Nuru boy who is keen to prove his worth to his tribe. After being banned from the ceremony that would make him an adult, he stumbles upon a legendary weapon and must flee across a dangerous land of gods, men and beasts to prevent it falling into the wrong hands.

The story was picked up by Darkhorse comics and has been compiled into graphic novels Bird Boy Volume 1: The Sword of Mali Mani and Bird Boy Volume 2: The Liminal Wood. With a thumbs up from Mike Mignola, it’s definitely worth checking out.

With Hark! A Vagrant, Canadian comic artist Kate Beaton, blended her expertise in history and anthropology with a talent for visual storytelling to give us this popular webcomic. Kate started the web strip during her breaks from her day job and they were all created in MS Paint (really).

Beaton’s simple, whimsical style, caricaturing Western historical figures from James Joyce to Ada Lovelace make Hark! A Vagrant a particular favourite of ours, and have won the artist multiple awards. She’s no longer adding to the collection, but the archived version is well worth a browse.

Written and drawn by Jake Wyatt with a helping hand from Kathryn Wyatt, Necropolis is an ongoing fantasy web comic is the tale of one girl’s quest for revenge. This web comic is updated every Wednesday, and has gained popularity for its stunning visuals and engaging story. When the story finishes (we’re not sure when this will be yet), there are plans to released by Image Comics as a print version.

Run by Lize Meddings and Laura Jayne Cox, The Sad Ghost Club is a web comic with a cult following. “The Sad Ghost Club is a club for anyone who’s ever felt sad or lost,” they explain in their manifesto. “It’s the club for those who don’t feel like they’re part of any other club; we love creating comics and zines to highlight the issues that a lot of ghosties go through.”

Branching out into tote bags, beanies, T-shirts, badges and more, the duo have come a long way with their tales of a lonely little ghost. Meddings and Cox’s approach ensures you’ll be smiling through each story, knowing you’re not alone in the world after all.

Created by Trudy Cooper and Doug Bayne, Oglaf is often a very NSFW web comic centred on a medieval fantasy realm which is decidedly sexual in nature. Not for the faint-hearted, Cooper and Bayne bring their world to life through hilarious short stories and inspirational illustrations – just don’t let your boss catch you reading it.

If you’ve embarked on role-playing games or dipped your toes into the world of medieval fantasy stories, you’ll know that people tend to take both very seriously. The Order of the Stick is a web comic that pokes fun at the subjects with a unique flair. It was created by artist Rich Burlew, who brings the stick figure into the modern age.

Artist and writer James Hornsby has been parodying and lampooning professional wrestling culture with his hilarious Botched Spot ever since 2008. Creating his own characters including Olav Orlav and Rad Bad DeBone, this is one of those web comics that anyone can enjoy – whether you like wrestling or not.

Deathbulge was initially a comic series about a death metal band, but illustrator and writer Dan came to believe that was too limiting, so decided to draw whatever he felt like but with some firm favourite reoccurring characters. It seems his change in direction worked, as the web comic has become a firm favourite among web comic fans. He has currently paused output as he’s working on the video game of the comic.

Scary Go Round is the home of the web comics of John Allison. There are a few different stories there, all of which form part of a shared universe, and take place around the city of Tackleford. The most recent comic, Giant Days, follows regular Esther de Groot as she attends university. An inventive web comic with colourful illustrations and witty dialogue that MTV favourite Daria would be proud of. The artist has taken a break and posted a link to Bobbins.horse, where he says there will be new content.

16. You’re All Just Jealous of My Jetpack

Tom Gauld is a hero of sorts among the illustrator and comic-loving crowd. Based in London, not only does he draw a regular cartoon for the Guardian newspaper, he’s also created a number of comic books. Although You’re All Just Jealous of My Jetpack is indeed, a printed publication, you can sample its delights on his Tumblr.

Gemma Correll, illustrator of Daily Diary, describes herself as a cartoonist, writer, illustrator and all-round small person. It’s arguable whether her sketchbook diaries technically count as a web comic, but they’re so charming that we just had to include them here. Charting her ‘mostly boring’ life, cute illustrations teamed with refreshingly honest observations make for some delightful reading